11 Oct. 2015, Petra – IASEM delegation met Dr. Emad Hijazeen, Deputy Chief Commissioner and Petra Archeological Park Commissioner.
During the meeting, the organization of cultural events in Petra was discussed, in the framework of a specific cooperation between Petra authorities and MCH partners in the Mediterranean area.

Petra is one of the most renowned historical and archaeological city in the world, famous for its rock-cut architecture and water conduit system. Established possibly around 312 BC as capital city of the Nabataeans, it’s the Jordan’s most-visited tourist attraction and UNESCO World Heritage Site since 1985. 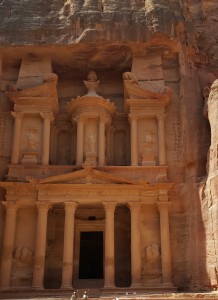 On February 2011, IASEM was the promoter of the official twinship agreement between Petra and Matera (Italy).

Matera is famous for its historical center called “Sassi”, considered World Heritage Site by UNESCO since 1993, along with the Park of the Rupestrian Churches. On October 2014, Matera was declared Italian host of European Capital of Culture for 2019.

After the meeting the memebers of IASEM were kindly guided through a breathtaking visit of Petra Archeological Park thanks to the valued collaboration of Dr. Hijazeen staff.