The Chairman of Konrad Adenauer Foundation, Dr. Hans-Gert Pöttering, through an action with a deep symbolic value, chose to sign the Manifesto of Mediterranean Civilization, sustaining, in this way, the fundamental values of dialogue and integrationwhich represent the pillars of MCH – Mediterranean Common House network. 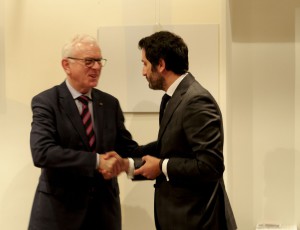 Iasem-Istituto Alti Studi Euro Mediterranei and KAS-Konrad Adenauer Stiftung had several collaborations since both the two institutions share the same commitment to enforce democratization processes and to promote socio-political integration in Europe and worldwide. Sharing these visions and intents, sustaining theoretically and practically dialogue, cooperation and peace which are the pillars on which MCH-Mediterranean Common House network is based on, a leading figure of European and worldwide politic, as President Pöttering, has decided to officially sign the Manifesto of Mediterranean Civilization, a document structured in 10 articles which promotes the values of sharing, responsibility and mutual solidarity throughout the Mediterranean.
The official ceremony for the signature was held on Tuesday November 24th 2015 in Rome at Konrad Adenauer Foundation Office. During the meeting, Caroline Kanter Director of KAS Representative to Italy and Vatican opened the working session, giving the floor to Giuseppe Papaleo, President of IASEM, who introduced principles and activities of MCH-Mediterranean Common House network whose Charta of Values is represented by the Manifesto of Mediterranean Civilization. 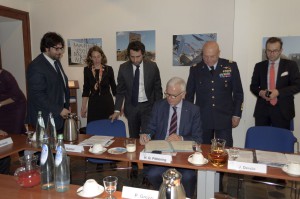 Signing the Manifesto, President Pöttering addressed to IASEM representatives encouraging words, remarking current historical complexity and the important meaning which human sharing initiatives as MCH network have, following the same line of Konrad AdenauerFoundation commitment. President Pöttering also underlined how, in Europe, each member troubles are the matters of the collectivity, for this reason he invited entire Europe to be unit in front of terrorist attacks.
Special guests were Lieutenant General Pasquale Preziosa – Head of Italian Air Force – and Prof. Paolo Garonna – Secretary General FEBAF banks, Insurances and Finance Foundation and Director General of IASEM as well.
General Preziosa, in his speech, gave a detailed analysis of current war worldwide scenarios, remarking how fight against instability has to be leaded building common tables and always wider global discussions. General Preziosa as well emphasized the necessity of an Europe unity to build an international coalition to solve the chaos.
Prof. Garonna discussed on the necessity to sustain new economic perspectives in the Mediterranean and African Countries, generating in this way new world stability and balance.
The Manifesto signature by President Pöttering together with the presence of authorities as General Preziosa and Prof. Garonna represented for the Manifesto’s promoters and for the MCH network in general an important step forward, an official recognition and an encouragement to carry on working